Like Those Who Dream: Chapter 5, ...Even If It Kills You

Like Those Who Dream: Chapter 5, ...Even If It Kills You
-Roy Lessin, Meeting in the Meadow 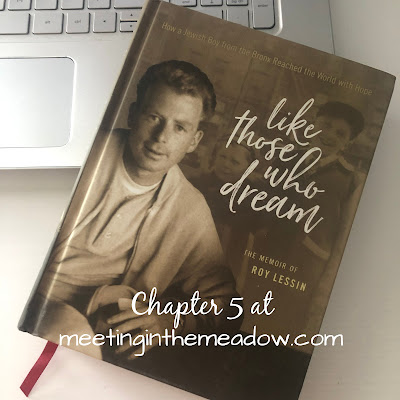 Someone has said, “It’s not the parts of the Bible I don’t understand that trouble me, it’s the parts that I do understand.” In my life, there has never been anything as convicting, as disturbing, as cutting, and as life-giving as Scripture. At key times, at crisis moments, at turning points, the Word of God was there to point the way, to not let me off the hook, and to demand my all. I couldn’t argue with it, out-reason it, pretend I didn’t hear it, or make it go away. It was there with love if I would embrace it; there with comfort if I would welcome it; there with guidance if I would follow it; there with hope if I would trust it; there with wisdom if I would accept it; there with promise if I would obey it—this truth would press in heavily upon me within a few short days after leaving LA.

As the plane taxied down the runway, I settled into my window seat and watched the city grow smaller as we began to ascend.  We immediately headed west over the Pacific Ocean before circling back to the East en route to Minneapolis. The sky was a brilliant blue and I could still make out a few surfers trying to catch an early morning wave. “Days like today make Southern California a great place to live,” I thought, “no wonder people move here by the droves.” In a few hours I would have an even deeper appreciation for the January weather in Southern California.

We were soon at cruising speed. I pressed the round, steel button on my armrest and leaned back on the seat as it moved into a more comfortable position. I smiled as my mind reviewed the events that took me from Valley College to my acceptance at Bethany Fellowship, “God had truly given me a treasure chest of memories over these past six months!”

As we descended into the Minneapolis Airport the sky was gray and the ground was white. In about thirty minutes I would also discover that it was bitterly cold outside. I shivered as I left the warm shelter of the terminal for the parking lot. I got into a dark, four door sedan driven by a Bethany Fellowship staff member who was assigned to pick me up. As we drove through the streets of Minneapolis everything looked bleak. The driver pointed out a few landmarks to show off the city, but I was unimpressed. Snow was falling and traffic was light. I observed a manmade ski jump out the driver’s window...it was quite a contrast to the surfers I saw on the beach only a few hours earlier.

Our route took us out of the city and eventually onto a country road that worked its way past some barns and open fields. We followed a curved road past a few farm houses, and then unexpectedly, the campus of Bethany Fellowship was in view. To a city boy like me this was definitely the boonies. We drove onto the campus and I was dropped off at the boy’s dorm. It was located on the second floor of a two story brick building. On the main floor was Bethany Fellowship Church, a large facility that could seat around 500 people. I was briefly shown the church and then taken upstairs to the room assigned to me by the Admissions Department. It was a disaster!

There were more boys attending school that semester than dorm space would allow. As a result, a larger room was converted into living space for five students. I was the last to arrive and was given the only remaining unoccupied upper bunk. There I was, in an overcrowded room with four complete strangers and no privacy.  One of my roommates was a farm boy, another was an Englishman, another was from Wisconsin, and the other was from another planet.

By the end of the second day on campus I was miserable! I missed LA, Eagle Rock Church, my family and everything else that meant home. When I was given my work assignment and told to report there each afternoon, my homesickness grew worse. I didn’t like my boss or the job I was given and couldn’t imagine doing it for an entire semester. In a place where I came for spiritual light, darkness was setting in all around me. I was getting desperate and felt something needed to be done, and soon. I had enough cash left from my trip to make some long distance calls and decided to put an exit plan into action.

Before the end of my first week on campus I had made several calls home. On my second call to my dad, I decided I would be firm about my desire to come home. I went on and on about how bad things were, hoping to gain his sympathy. All of it was intended to lead to my emotional plea for help...

“Dad, I really believe that I have made a big mistake in coming here. I would like to return to LA, and I was hoping you could help me out with a plane ticket?”

For a moment, things got very quiet on the other end of the line. Then the silence was broken. Instead of words of sympathy and support for my decision, I heard a response I was not wanting or expecting to hear...

“Roy, there is no question that God has called you to Bethany. He has confirmed it in many ways. It would be a great mistake for you to return home. You need to stay there, even if it kills you!”

He then concluded by sharing the following passage of Scripture from Luke 9:62 “Jesus said to him, No one who puts his hand to the plow and looks back [to the things behind] is fit for the kingdom of God.”

I was stunned. Once again, the Word of God penetrated into the deepest part of me, and like a steel arrow, pinned me to the wall. I had no wiggling room. It was “yes” or “no” to God’s call. No other options remained.

My dad’s journal entries reveal a deeper insight into his concerns for me during that time.

Much burden for Roy today— the enemy is certainly after his faith…Great travail and intercession by all the brethren at prayer meeting tonight for Roy.

At this point I knew I could not turn back, or even look back, and expect to follow God’s call upon my life. I told the Lord I would follow Him, yet struggles remained. I was there, at Bethany, in body but not in heart. I was enduring, but not enjoying or delighting in the place God had placed me. The struggle would continue for many weeks. During those weeks my attitude was terrible and I remained uncooperative with the school rules and work program. I went from job to job and boss to boss. Eventually, I wound up in the Lefse Department, a place where the school manufactured electric cooking grills, often used for the making of Lefse, a favorite Norwegian bread in the shape of a large tortilla.

The manager of the department was Al Linder. He was the perfect person for me to report to. He was even more stubborn than I, and decided he would stick with me regardless of my attitudes and unwillingness to work. Al was tough but loving, and genuinely cared about me. When I came to work each day he put me in a corner of the work area where a large barrel of Lefse Grill handles needed to be assembled. He left me there to sulk as much as I wanted and never said a word. There I sat, hour after hour, all by myself, slowly assembling Lefse handles, listening to the sounds of machines grinding metal, and wondering if I would ever know joy again.  One day, as I sat in my wooden, straight back chair in the corner of the shop, Al walked up to me and said, “Don’t you think it’s time to unpack your bags?”

He didn’t wait around for an answer, he just left me there to think about what he had just said.

The Lord taught me many things through Al, but one of the greatest lessons I learned was that when you speak a word from God into someone’s life, you don’t have to defend it, explain, argue it or debate it, but deliver it, like a pony express  agent riding up to the station with the mail. Once delivered, the best thing you can do is ride away and let the Holy Spirit unpack the mail within a person’s heart. That day, in the early spring of 62, in a smelly, oily, noisy factory, Al Linder delivered the mail.