Like Those Who Dream: Chapter 15, Mercy Abounds
-Roy Lessin, Meeting in the Meadow

I believe in God’s mercies. The Bible tells us His mercies are new every morning. Each of our lives are testimonies to the mercy of God. Before I yielded my life to Jesus Christ at the age of 19, it was the mercy of God that spared my life on three separate occasions. On each of these occasions my brother Don was close by… 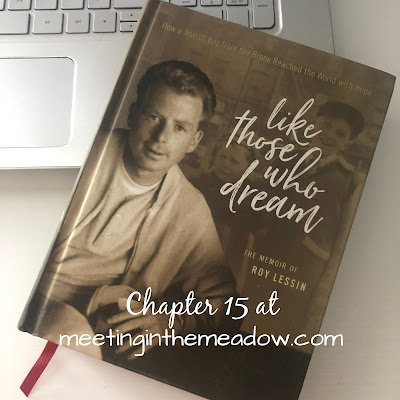 I was born in the Bronx, New York, home of Yankee Stadium and the Bronx Zoo. It was a great place for an active boy to grow up. I spent the first six years of my life riding my tricycle on the sidewalk or at the city park, going to watch an occasional ballgame at the Stadium, or spending hours with the baby animals at the petting zoo. In the summers, my mother would take my brother and me out of the city to Newtown, Connecticut, to live on a farm owned by one of our relatives. It was an adventurous place to be during the summer months.

There were trees to climb, bullfrogs to capture, night crawlers to find in the ground, and fish to catch in the nearby creek. The farm did have its dangers, however. By the side of the farmhouse, my aunt kept a large rain barrel to catch the rainwater. As a two-year-old, I walked past it one morning. It looked like something I should explore. The barrel was taller than I, so I decided to pull myself up and have a look inside. The barrel was full of water at the time and I had no concept of the danger I was facing.  As I strained to look inside I fell in, head first. There was nothing I could do to escape. I could not yell or scream and I was completely out of anyone’s sight that might be passing by. I had only seconds to live.

At the very moment I fell into the barrel my brother Don was standing on the back porch of the farmhouse. He saw the whole thing happen. Don, aged seven, made a decision that saved my life. Instead of running into the house to find help, he immediately ran to the barrel, grabbed me by the legs, and pulled me out.

The next life-threatening incident happened several years after our family moved from New York to Los Angeles in 1949. We were staying with my grandparents temporarily until my parents could find a house to rent. One Saturday morning, Don and I decided to go outside and play catch. There wasn’t enough room in the backyard to throw the baseball very far, so we went out front and played in the street.

Things were going great until Don made a hard, low throw that bounced through my legs. The ball rolled down the street and across a busy intersection. I chased after it without thinking about the danger. No cars were present at that moment and I made it safely across and picked up the ball.

In the meantime, Don ran to the end of the street and yelled out to me across the busy intersection, “Don’t come back across until I tell you it is okay.” I stood there, between two parked cars, waiting for him to give me the okay to cross.

“Now!” he yelled. I took off. His view must have been blocked, because I only took a couple of steps when, to my right, I saw the front headlights of a car coming right at me. Don watched in horror as the car hit me head on. I did two flips in the air and landed on my back. I sat up bewildered and started to cry. Don ran home and told my mom what had happened. She panicked. An ambulance was called. The driver who hit me was scared and worried about my condition. When the ambulance arrived I was taken to the hospital for x-rays. I had a concussion and some bruises on my back, but nothing else was wrong and I was released.

The third incident occurred when I was in high school. My brother and I were members of a social club called the Shantels. In the fall we would often get some the guys together and play football. One weekend we played on a field that was located at a nearby schoolyard. The end-zone on one end of the field was right next to a basketball court. It wasn’t the best set up, but it would have to do.

The team I was on wanted me to play a wide receiver. I loved going out for passes, making the catch, and running for a lot of yardage. As the game progressed, a pass play was called. It was going to be a deep pass and I was told to run into the end-zone. I ran as fast as I could. A defender closely followed me down the field. When I got into the end-zone the ball was in the air. It was a perfectly thrown pass and I ran toward the back of the end-zone to make the catch. Going at full speed, the ball landed safely in my arms. I took two more strides and ran headfirst into the steel pole that was holding up the basketball hoop. I don’t remember what happened after that, but when I woke up I was stretched out on a school bench. Don was standing near me. “I thought you were dead,” he said, “When you hit the pole I couldn’t believe how loud the noise was. You instantly feel to the ground. You didn’t move. I can’t believe you are still alive.”

The mercies of God also spared my brother from death. About a year before he gave his life to Jesus Christ, he was attending a party at one of the beach towns in Southern California. He was with two of his buddies from the Shantels. They had all been drinking heavily when they left the party late that night. Don was driving. As he turned the car onto US Highway 101 he picked up speed. There was a light rain falling and the streets were slick. As he came over a hill, Don saw a car coming at them. Both cars were going over 60 miles-per-hour. They hit head-on. Car glass and bodies flew everywhere. Don’s friend, who was in the front seat, went through the windshield, slicing up his forehead. The friend in the backseat flew out of the car and landed on his feet running. He was unhurt. Don was also thrown from the car and walked away untouched. The life of the driver in the other car was also spared.

A few weeks after his accident, Don had a visit with my dad. During the visit, Don, in a rather cocky tone, told my dad about the wreck on 101 and ended his comments by saying, “Well, I guess I’m just lucky.”

My dad looked at Don intently and said, “No, you’re not lucky…God just didn’t want you to die yet.”

I am so thankful for the mercies of God that were extended to Don and me in our youth. It was because of His mercies that we were able to spend over 45 years as brothers in Christ. Even though we spent many of those years serving the Lord in different places, God tied us together with deep cords of love. Don was my faithful friend, mentor, encourager, and co-laborer in God’s Kingdom.