Like Those Who Dream: Chapter 4, The Call
-Roy Lessin, Meeting in the Meadow

What can you say about the call of God? How can you know it, understand it, receive it? It can come mysteriously, like a burning bush that isn’t consumed; powerfully, like a mighty rushing wind; dramatically, like a bright light and a voice from heaven that calls out your name.

In the fall of 1961, the call of God began to be revealed to me like rain drops forming a trickling stream, soon to be fed by merging streams, eventually forming a strong river that would find its way to the sea of His heart.

I loved attending Eagle Rock Covenant Church. It was the day of “firsts”—my first church, first pastor, first youth leader, first Christian friends, first sermons, first fellowship in a college group with my brother, Don. I was not doing very well with Christian terminology, however, and one Sunday morning, when I heard the phrase, “Jesus died on Calvary,” I could not imagine what a Cavalry was doing in the Bible. 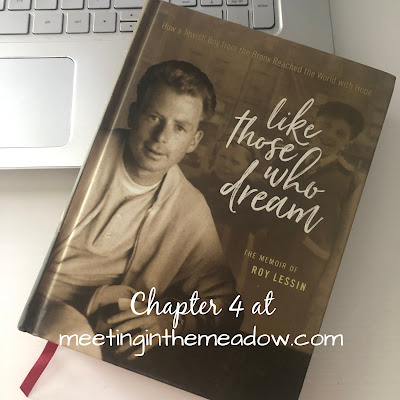 A truth that I did understand was my need to be baptized. The teaching I received was meaningful and I knew it was something I wanted to do in obedience to Christ. After one Sunday morning service, during an invitation at the end of the sermon, I went forward and told the pastor that I wanted to be baptized. He was very excited to hear the news and in a few days set a date. It would be during a Sunday night service. It was a special moment for me when, on that scheduled Sunday night, I publicly shared my faith in Jesus Christ with the church body and stepped into the waters of baptism. I was discovering that every “yes” I said to Jesus would lead me further into His will and plan for my life.

I was learning new things weekly, but the river of God was steadily drawing me away, and my desire to study the Bible in depth continued to increase. One night I asked my dad if he knew of any Christian Colleges I might attend. He told me of three that he could recommend. One was located in New York City, another was located in Canada, and the third was located in Minneapolis, Minnesota.  He had some literature on the schools which gave me a good overview of each campus. After some deliberation, I decided to write a letter of introduction to each school and see what unfolded. Within a week I heard back from the school in Canada and the one in Minneapolis. The school in New York never contacted me and was quickly eliminated. The responses from the other two schools were promising, which made my selection process more difficult.

“What would you suggest, Dad?” I asked, after pondering the two letters for some time.

“Why don’t you take both of the letters and place them upon your bed, get on your knees, and ask God to show you which one of the two letters you should answer.”

“That’s what I’ll do,” I quickly replied.

After prayer, it was as if I saw a scene change in a movie, the school in Canada began to fade into the background, as the school in Minneapolis came sharply into view. Within a day or two I had composed a response, filled out an application, and sent it off addressed to the Admissions Office.

One of the attractive things about this school was its low cost. It was a three year, all year program, which included summers. Students worked on campus to cover their tuition. The only required money payment was a onetime fee of $150.00 upon acceptance to the school. They called it “seal money,” a way of confirming God’s will for a student by “sealing the deal” with the needed payment. The idea of going through a three year, intensive Bible study program, and graduating without any debt was a perfect opportunity for someone who had no bank account and very little cash on hand.

After mailing my application, several weeks passed but there was no reply from the school. Their spring semester was starting in early January; It was mid-December and I needed an answer soon. I finally decided to call. I looked up the number for Bethany Fellowship and dialed the number.

“Hello, this is , may I please speak to someone in the Admissions Department?”

“This is calling. Several weeks ago I mailed an application to attend your school for the spring semester. I haven’t heard back from you since then and I need to know if I have been accepted so I can begin to make preparations to come.”

“Yes, Roy, I do remember reviewing your application. I’m sorry we haven’t gotten back to you sooner, but we’ve just gotten behind in our correspondence. I can tell you that you have been accepted for the spring semester and you will be receiving a confirmation letter in the mail in a few days.”

I was elated! I immediately shared the news with everyone, and the preparations got underway.

The things that transpired from that point on, until my departure to Minneapolis, can best be summed up by excerpts taken from my dad’s journal.

The events of the year as regards Roy and the call of the Lord to service would not be complete without the events of this day being acknowledged as the hand of God on Roy.

After the evening service, the Pastor called a deacon’s meeting. I was called aside and asked if Roy had any money to go to Bethany Fellowship. I said, “Not a dime.” He said, “That’s all I want to know” and hurried off to the deacon’s meeting…

I returned to church at 11:00 PM for the New Year’s Eve Communion and Watch Night Service. It also turned out to be an Ordination Service, for the Pastor called up Roy to the Altar. The Pastor asked me to lay hands on Roy and pray over him.

“God, thank you for being a Father to Roy during all those years when I couldn’t be.”)

The Chairman of the Board of Deacons prayed over him next, then the Pastor.

Then—!—the Pastor asked for an offering for Roy to be taken to send him off to Bethany!! I don’t know how much was offered but it was a mighty silent offering! (By that he meant it was mostly bills, as there was no sound of change being dropped into the offering plates.)

The Pastor then called for testimonies…many young people in the meeting yielded to God. What surrender! What brokenness! It was a joy to behold!

Roy made plane reservations for Saturday morning, leaving at 7:00 AM…He called his grandparents to say he was leaving, Grandpa hit the proverbial ceiling.

(A few months earlier, I had told my grandfather that I was a believer in Jesus Christ. When he heard the news he scolded me, mocked Jesus, and demanded I change my mind. I told him I would not, and in a rage, he cut me off from my inheritance.)

The Pastor asked Roy to share a few words of testimony at prayer meeting tonight. Then one of the Deacons presented him with a check from the offering taken Sunday night—$110.50!!! Praise the good Lord!! Roy’s plane fare is

Roy brought a devotional to the department at World Vision (by request) It blessed one woman in particular whose husband is with the Gideons and has been discouraged, not knowing if his work was bearing fruit. Roy’s relating my acquisition of a Gideon Bible in Las Vegas rejoiced this woman’s heart and she was going to relay the story to her husband who would surely be encouraged. Glory!

God has supplied a remarkable wardrobe for Roy who was almost destitute of clothes just a few short days ago. All sorts of apparel and things; a sister came to the house this morning and gave Roy $10.00 and a bathrobe. He bought shoes with the money.

He has said his “good-byes” to all the family, only Grandpa was bitter.

Roy bought his plane ticket. The Lord gave him John 15:16 for assurance. “You did not choose Me, but I chose you and appointed you that you should go and bear fruit, and that your fruit should remain, that whatever you ask the Father in My name He may give you.”

One incident was not recorded at this time. The night before leaving for Minneapolis I heard the weather report. LA was going to be fogged in until late morning. Knowing I had to get to the airport around 6:00 A.M., I decided to go to prayer and ask the Lord to lift the fog that was forecast. Before going to bed that night I announced to all that there would be no fog in the morning and that we should plan to leave as scheduled. The next morning, when we got in the car to leave for the airport, the skies were clear.

©2022 Roy Lessin, DaySpring, Meeting in the Meadow. Used with permission. All rights reserved.