Jesus: The Image of God

Jesus: The Image of God
-Roy Lessin, Jesus Name Above All Names
God...has in these last days spoken to us by His Son, whom He has appointed heir of all things, through whom also He made the worlds; who being the brightness of His glory and the express image of His person, sat down at the right hand of the Majesty on high. -Hebrews 1:1-3 NKJV
Years ago there was a movie titled The Invisible Man. The main character lived and moved about like everyone else, but no one could see him. Even though this man had thoughts, feelings, desires, and a will, no image appeared in the mirror when he stood before it.
The Bible tells us that God is also a spirit and that no one has ever seen Him. Still, He is a person who thinks and feels. He has a personality, a nature, and a character. He is love, He is holy He is good, He is faithful, and He is true. One of the many differences between God and the invisible man is that when God looks in the mirror, and image of His likeness does appear. It is Jesus Christ, and exact representation of who God is in His nature, His character, and His person. 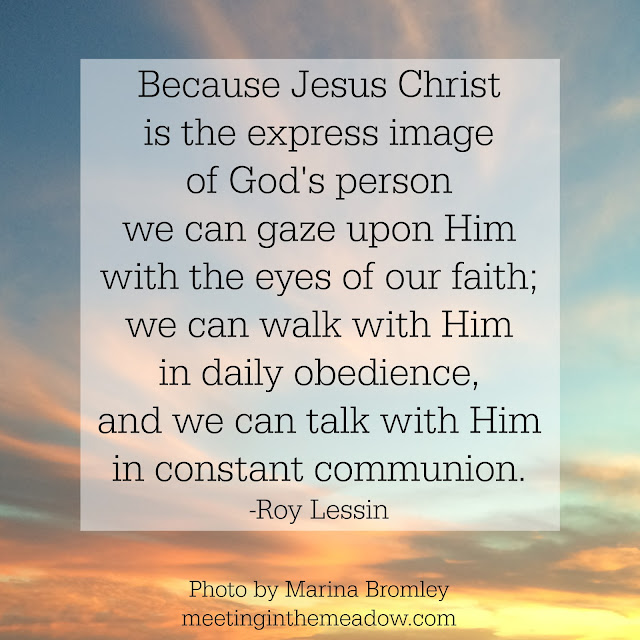 We do not need a physical image of Jesus to know what God looks like. The Image of God is Jesus Christ, seen through the words He spoke, the works He performed, the attitudes He expressed, the mercy He extended, the love He demonstrated, the sacrifice He made, and the gifts He has given.
Because Jesus Christ is the express image of God's person we can gaze upon Him with the eyes of our faith; we can walk with Him in daily obedience, and we can talk with Him in constant communion.
...
©2011, 2021 Roy Lessin, Meeting in the Meadow. Photo by Marina Bromley. All rights reserved.
at February 08, 2021

Email ThisBlogThis!Share to TwitterShare to FacebookShare to Pinterest
Labels: 2021 Devotions, Jesus Name Above All Names, names of Jesus