The Blessing of Obedience

Every now and again, we hear of ways that God uses ordinary people to do extraordinary things for His benefit. It’s usually not a lightning strike, or a beacon of light, but usually God’s “still, small voice” that leads them to do something a little out of their comfort zone. When we do it, we may never know the impact it has on someone’s life—but sometimes God allows us to see the blessing of our obedience.

Roy received this Christmas letter a few weeks ago, and it shares the story of one of those instances. May we all be so tuned-in to the voice of God, and willing to act in obedience, that He might use us to further His kingdom in the New Year.

"Watching the evening news, they told of a 33-year-old man who had served in the military, came home to South Carolina, and while working as a Security Guard has been shot and killed protecting the establishment where he was employed. I could not get this off my mind. I even wrote his name down.

The next few days I began to go through the obituaries and I found this man’s name. It gave his mother’s address at the end. I kept feeling I needed to do something. After a week I sat down, wrote his mother a note and sent her a copy of the book my friend and I have given out to more than 5,000 people, “Because of Jesus, Today is Your Best Day.” I placed them in an envelope, prayed, and mailed them. I began to say, “Lord, I hope I heard you clearly.” About 2 weeks later I received a very warm note from the Mother. My heart was so full of Thanksgiving.

Fast forward all the way to November. I was at the grocery store. I had just pulled in, had the top down on my car and was listening to a beautiful song entitled “Eye of the Storm.” Yes, I might have had my radio a little loud. I did not notice the woman sitting in the car next to me on the phone.

The woman got out of her car, she caught my eye and said, “I love that song, I have never heard it.” I immediately apologized that I had my radio turned so loud. All of a sudden she noticed a copy of “Because of Jesus, Today is Your Best Day,” laying in my seat. She said, “Oh my gosh, I have that same book. I received a copy of it when my son died.” I began to shake all over. All I could think to say is, “Do you have time to go back in the grocery store and let me treat you to a coffee?” (This Starbucks girl can always drink a peppermint mocha.) She said she did, and later said she could not believe she did that.

Well, during our conversation, I had to hold my coffee with two hands because I was shaking so badly. I began to explain how I had felt that God nudge and I was the one who had sent the book to her. She began to weep and somehow it just did not matter where we were. We were in a place that at the time only God could have brought us. She told me, “As you know, I do not live on this side of town. I was so down this morning and could not go into my normal grocery store where I always run into someone who wants to tell me they are grieving for me. I did not need that.” She had heard how nice this store was and she needed a change of scenery. Well, she sure got it! We talked on and and she asked me again, why her? Why did I feel I should send her anything? I explained that only God could have done that. Only god could have placed her at the grocery store with me. We left after we prayed together. I left with a total different feeling about the Holidays. Yes, this year might look a little different, but hey, NOTHING CAN ROB US OF OUR JOY. JESUS IS STILL THE REASON FOR THE SEASON. 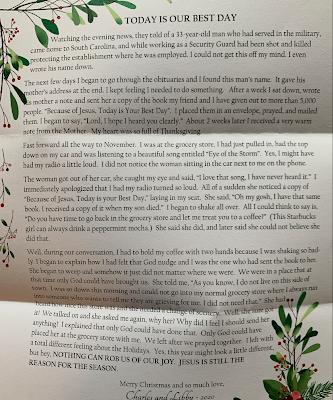