Today is Your Best Day Because of God's Plan

"For I know the plans I have for you," declares the Lord, "plans to prosper you and not to harm you, plans to give you hope and a future." Jeremiah 29:11 NIV

God has a plan for your life. He brought you into this world to fulfill that plan. It is the best plan that anyone could ever make. It is a plan that will bring Him the greatest glory and make you into all He desires you to be. Today is your best day because God is working out that plan. 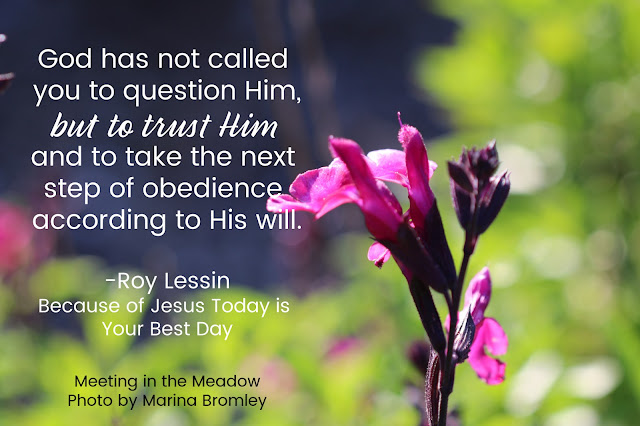 God's plan may not take you in the direction you were expecting, it may not fit into your natural way of reasoning, and it may even seem to contradict what God has promised you. When Joseph was in his youth he saw his brothers bowing down to him, but Joseph never imagined that God would fulfill that dream by allowing him to be sold into slavery by those same brothers. Abraham had a promise from God that his son, Isaac, would be heir to God's covenant promise, but Abraham never thought that God would test his faith by asking him to offer Isaac on an altar. Joseph and Mary had no plans of traveling to Bethlehem in the late stages of Mary's pregnancy, but a Roman census forced them to travel to the very place where the prophet declared Jesus would be born. Peter heard Jesus' promise to make him a fisher of men, but Peter, a devout Jew, had no idea that God would use him to bring the Gospel to the Gentiles.

As you follow God's plan for your life, you do so by faith. It is important to remember that He is the Guide and you are the follower. He is not going to bring you into His planning room as a consultant to help Him decide what is best for your life. God has not called you to question Him, but to trust Him and to take the next step of obedience according to His will. God has said, "I will bring the blind by a way they did not know; I will lead them in a path they have not known. I will make darkness light before them, and crooked places straight. These things I will do for them, and not forsake them" (Isaiah 42:16 NKJV).

If your life was like a painting, the strokes that are being added to the canvas today may not make much sense when viewed alone. However, God doesn't waste any strokes when He uses His divine brush, for He sees the final picture and knows exactly how each stroke will fit into the painting's finished image. You may think the color being used today is too gray and needs more brilliance, but the time will come when you will see that the painting would not be complete, and the meaning of the painting would be weakened, if the gray strokes were not included in the exact places they appear.
...
Because of Jesus Today is Your Best Day is available through our affiliate link with DaySpring, on the right side of the page, and through Christian retailers everywhere.
©2020 Roy Lessin, Meeting in the Meadow, all rights reserved.
at May 11, 2020

Email ThisBlogThis!Share to TwitterShare to FacebookShare to Pinterest
Labels: 2020 devotions, Because of Jesus Today is Your Best Day