A Heart for Jesus... The Shepherds: A Praising Heart that Celebrates God’s Presence

For some shepherds in the fields near Bethlehem, a routine night of watching their flocks was about to turn into the most glorious night in history. An angel of the Lord, to be followed by a great number of the heavenly host, all filling the air with praises to God, were far beyond anything they could have expected to visit them that evening. And the message that was delivered to them from heaven was far beyond anything they could have imagined. Yeshua, (the Savior) is born? The Messiah? Now? To us? Here? In a manger? Their hearts embraced it all! What an AMAZING presentation God used to make the greatest birth announcement ever heard! 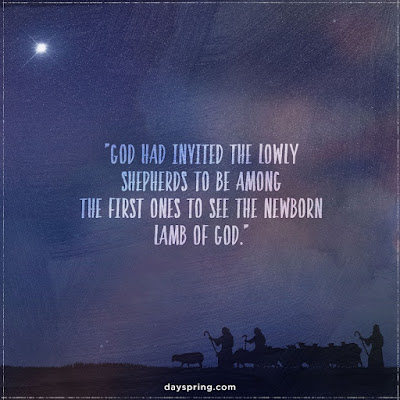 They moved as quickly as they could to the place where the angel had told them they would find the child. When they arrived in Bethlehem, they found Mary and Joseph, and the baby Jesus in a manger. It was just as the angel had told them…God had invited the lowly shepherds to be among the first ones to see the newborn Lamb of God. They couldn’t contain the wonder and the joy of it all! After leaving Jesus’ birthplace, the shepherds could not stop giving praise and glory to God for the amazing things they had heard and seen that night.
The breathtaking, heart pounding excitement about the birth of Jesus Christ that the Shepherds experienced is not only because “a child had been born and a son was given,” but that God was now present in human form. The God who dwelt in the Tabernacle and the Temple of Israel, now dwelt among them. Jesus Christ was everything God had to say to us, all He wanted to be to us, and all He wanted to do for us. Jesus was in reality, God become man.
To Israel, Jesus’ birth meant that God was now more than the God of the cloud and the pillar, more than the God of Mt. Sinai, more than the God who gave them the commandments written on stone, and more than the God whose awesome glory was manifest behind the vale in the Holy of Holies. The Apostle John writes to us about the daily wonder of being in the company of the Son of God…“(Jesus Christ) the One which was from the beginning, which we have heard, which we have seen with our eyes, which we have looked upon, and our hands have handled, concerning the Word of life.” 1 John 1:1 NKJV
Jesus was the Word made flesh who tabernacled among us…
— It was Jesus’ hands that lifted the weary, that comforted the sorrowful, that blessed the children, that welcomed the sinner, that touched the leper, that healed blind eyes, that opened deaf ears, that fed the multitude, and that washed the disciple’s feet.
— It was His voice that calmed the sea, that spoke peace to the fearful, that cast out demons, that brought life from death, that delivered the captives, that brought peace to the fearful, that reassured the doubter, and that gave hope to the downcast.
— It was His face that looked upon the needy with compassion, that shed tears of sorrow at the loss of a loved one, that shone like the sun with eternal glory, and that expressed the joy of doing His Father’s will.
— It was His hands and feet that were nailed to a cross.
— It was His side that was pierced with a spear.
— It was His body that died and was raised from the dead.
The eyewitness accounts of the coming of Jesus Christ recorded in the Gospels is a declaration of praise to each of us this Christmas Season—
Jesus came in a way that fulfilled so much;
Spoke in a way that taught so much;Lived in a way that revealed so much;Blessed in a way that gave so much;Died in a way that provided so much;Arose in a way that conquered so much;Loved in a way that meant so much.
Then the shepherds returned, glorifying and praising God for all the things that they had heard and seen, as it was told them. Luke 2:20 NKJV
©2018 Roy Lessin, all rights reserved.
at December 24, 2018

Email ThisBlogThis!Share to TwitterShare to FacebookShare to Pinterest
Labels: Christmas

Use Our Affiliate Link!